To say that I have a love-hate relationship with horror games would be an understatement. The horror genre in movies is a completely different story. I’m usually in the theater opening night with front row seats for every horror movie, whether it’d come out of Hollywood or some low-key indie director. I honestly can’t get enough of scaring the living shit out of myself. Which leads me into the meat of my discussion – a little demo that is scaring up YouTube streamers and playthrough-ers called Infliction. Once a Kickstarted game, Infliction is, according to indie developer Caustic Reality’s official website, “an interactive nightmare, a horrific journey through the dark secrets of a fractured home. Unstuck in time, players wander through the heartbreaking remnants of a once-happy family, piecing together clues and struggling to atone for past sins. All the while a malevolent force follows close behind, seeking nothing but violent retribution.” Sounds welcoming, doesn’t it? Play this demo…it also serves as a laxative if you’re all clogged up! 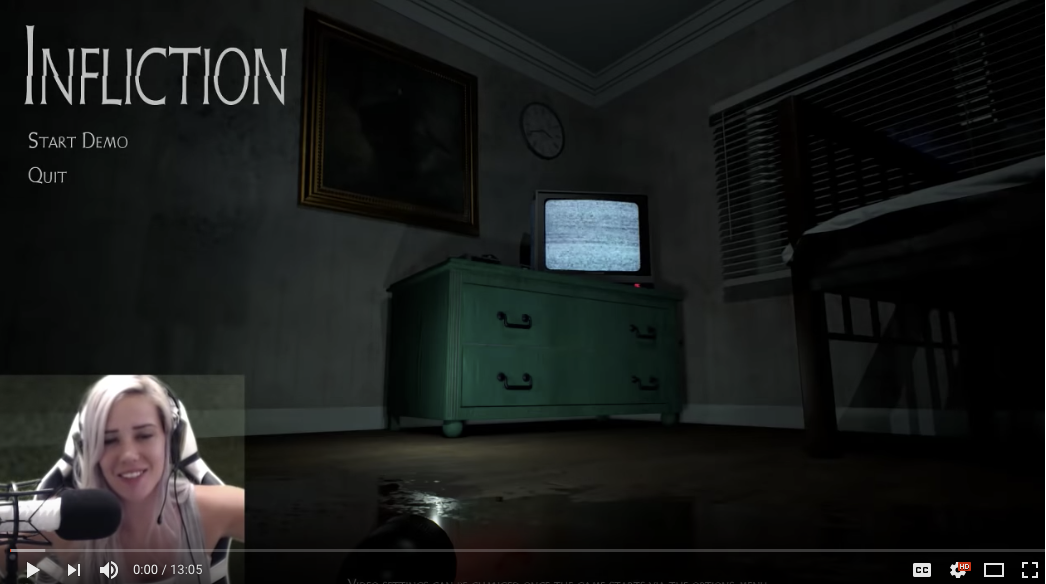 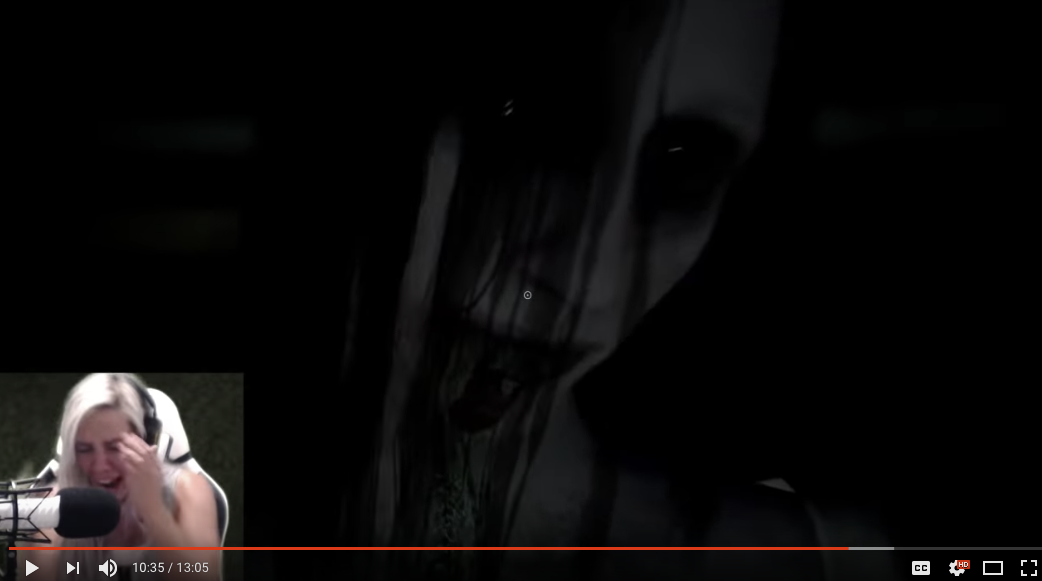 Just for expositions sake, P.T. or “Playable Teaser” was an ill-fated project that would eventually be announced as “Silent Hills”. Developed by Kojima Productions, under the pseudonym “7780s Studio”, and published by Konami, the game was directed and designed by Hideo Kojima, in collaboration with film director Guillermo Del Toro. It was released on August 12, 2014, but as of May 2015, it was unable to be downloaded again from the Playstation store. Rest in the sweetest peace, “Silent Hills”. Its cancellation was a tough pill to swallow, considering the promise and overwhelming anticipation the final version had. There has been news over the coming years of several spiritual successors, such as Allison’s Road (which oddly enough had been cancelled and then re-birthed again not too long after) and now Infliction. Releasing this Halloween, Infliction looks to be the next Outlast or “Silent Hills”. **SPOILERS AHEAD! SKIP FOUR PARAGRAPHS AHEAD IF YOU DON’T WANT THE DEMO TO BE SPOILED!** 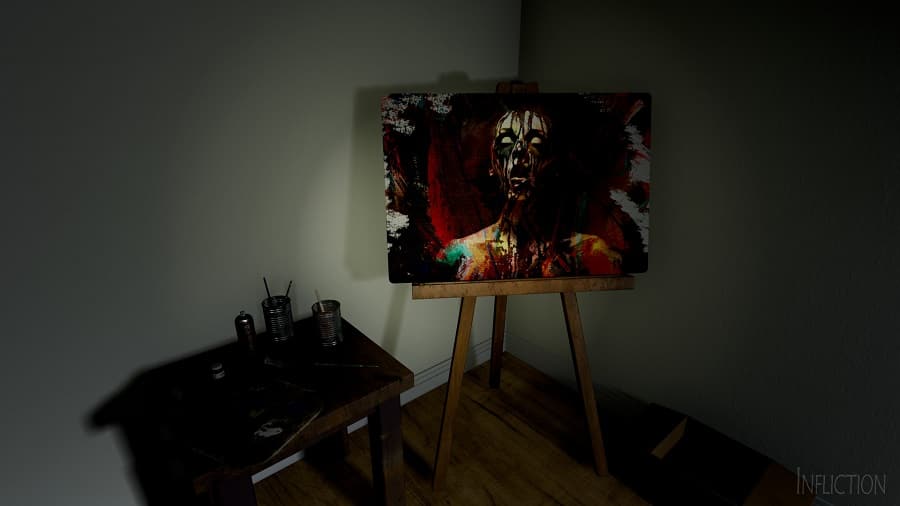 (What a beautiful painting. You will see plenty more like this throughout the 15-20 minute demo) [Credit: Caustic Reality]

The demo shares many similarities to P.T. : the plot opens with a strange, increasingly decrepit house which isn’t quite as disgusting as The Texas Chainsaw Massacre house  (comes pretty darn close), ridiculously strange artwork littered throughout the walls, a malignant force that acts as unpredictable as the finale to Lost ( I still don’t understand the ending…were they in purgatory the entire time or not?), a wired telephone with a creepy douchebag sputtering even creepier lines on the other end, and a completion time of around 15 to 20 minutes. The story, or at least what little of it is presented to us, while not completely original, proves to be engaging. 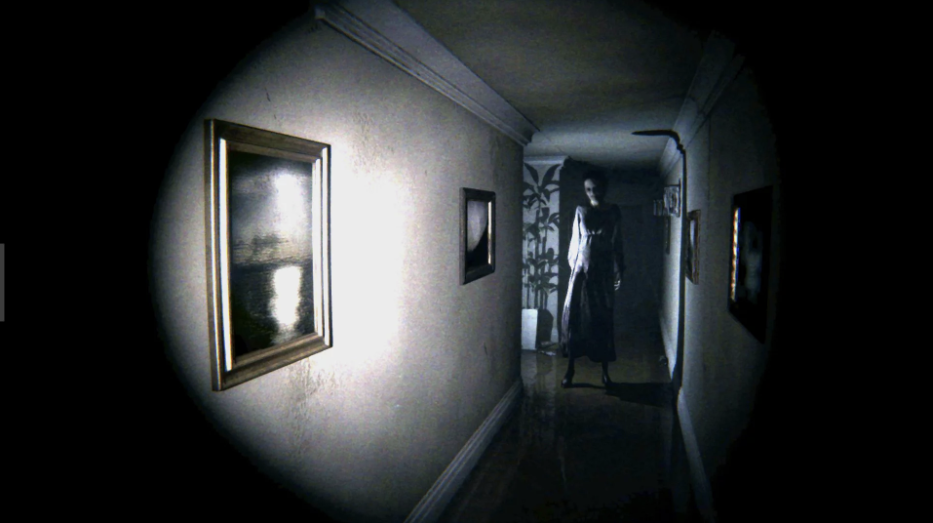 From what I’ve picked up, and I say that literally because most of the exposition you get is from an old radio, pictures and letters/notes, Infliction tells the tale of an alcoholic man named Gary, an underpaid security guard who causes chaos in his house with his artist wife and baby daughter. His wife is an artist with an incredible eye for detail, however she is given the short end of the stick when her work is declined from one of the exhibitions for being submitted too late past the deadline. It’s unclear whether the player is Gary or not, but it opens on you waking up in a small, dark bedroom equipped with nothing but a flashlight that reveals a bloodstain that you had been lying on. The demo’s pace is as quick or as long as the player wants it to be, considering absolutely nothing in the environment has to be interacted with for the story to progress. Me, well, I like my coffee with some added sugar and some skim milk – what? I’m trying to be healthy. I check every nook and cranny for any piece of detail on what exactly happened to this house and why in the name of God it’s so goddamn dark! Throughout the 20-minutes I played, I often questioned whether my character was sane or not. I mean, who in the right mind displays terrifying paintings on their walls. Seriously, there isn’t one painting that made me want to say, “Oh, what an interesting piece of art. I could see that hanging in my bedroom!” But I digress!

Within the opening minutes of the demo, I turn on a radio sitting on top of a staticy TV (that I turned off immediately because no, thank you!) that seemingly offers me some details of the world. There has been a string of murders going on around town, but the broadcast then switches to the topic of alcoholism and how it can be fought. One thing leads to another, and I decide to walk out the door that opened by itself while I was listening to the radio (dandy!). I take a couple of steps and am greeted by a black shadow that embodies a female. I walk towards it, it screams and makes demonic sounds, convulses and levitates into the door at the end of the hallway. What’s behind that door you ask? Well my friend, it’s the fucking basement where Gary goes to drink every night after work! Of course. As I “willingly” make my way towards the garage door, the telephone rings. I pick it up. “She’s here.” A man? A spirit? The neighbors dog across the street who always shits on my lawn? I don’t know because I stopped for an hour or two right there!

Eventually, I decided to but up and get back on the game. I go into the garage and am greeted with a plethora of tools that would serve as excellent defensive weapons: hammers, rusty shovels, screwdrivers, a butterfly knife, and a fucking fire axe. Oh yeah, and a refrigerator with at least 50 empty cans of beer. C’mon Gary, don’t you know how many calories and carbs are in a single beer?! However, my character is only able to pick them up and inspect them. Lovely, it’s one of these games! After meandering around the dark garage questioning why I couldn’t arm myself with any of these weapons (for defensive purposes, of course), I unveiled a mirror, that when I looked into it, the locked basement door with chains strung around it was now cracked open. I walk into the mirror, and am transported to another dimension of the house. The basement door is cracked, but the words “Keep Out” are scraped into it. Well, obviously the game doesn’t want me to go in there…you feel that? That’s sarcasm. I try each and every other door, but surprisingly, they’re all locked.

I make my way downstairs and find what appears to be a satanic symbol spewed across the floor in blood. On the table next to it, a demonic book with a reversed cross in it. Everywhere else, blood, guts, and a creepy white mask in the center of the symbol. I read the book, and discover that Gary had been conjuring a “greater power” through sacrificial ceremonies of innocent animals. Oh Gee Gary, I was starting to like you! I close the book, hear a woman’s laugh, watch as all of the lights explode, and stand in silence. Okay, I’ll just walk to the same door that led me to this God awful place. Nope, a convulsing force stands in the only light illuminating from the doorway. Before i could even utter the words, “Are you fuc-” The bloodied woman grabs my face and screams so loud that her jaw overextends. The trailer of the game then plays. I lost a subscriber on Twitch because I acted “like a little bitch” when playing this game.

(Oh Gary, you and your demonic rituals you!) [Credit: Caustic Reality]

Infliction isn’t all that original. Jump scares are still jumpscares and the story is as depressing and evil as everything Hollywood produces, but it’s the little moments of reading the exposition and discovering what happened to this family that sold the game for me in the end. Something is truly scary to me when it successfully makes my skin crawl without making me jump out of my seat. I’m excited to unveil more secrets about Gary and why he chose to summon these demons in the first place, and I think you should be too. If you’re a true horror fan, give this game the time it deserves.